Yes, another sell-out event at the Hall!
The Jimmy’s Hall extravaganza on Friday was a rip-roaring success. The hall was jam-packed and 80 ticket holders, ten volunteers and five musicians came together to watch radical director Ken Loach’s inspiring film. We had the idea of showing the film in the hall because it has so much resonance in our community. It is the true story of pre-war political activist Jimmy Gralton and his struggle to save a community hall in rural Ireland. Jimmy’s hall hosts education classes, boxing, singing and much dancing. It is a heart-warming story of community spirit. Our hall too, was saved by local people who reimagined Exeter Street Hall as the beating heart of our local community. 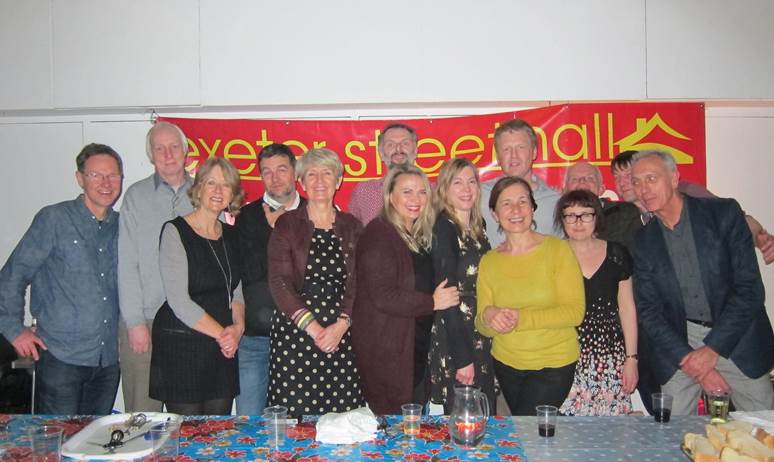 Thanks to the efforts of so many committed volunteers, the ambitious event ran without a hitch. Iain Chambers served up a hearty Irish stew and the bar was in great demand. Our special guests, Ken Loach’s producer Rebecca O’Brien and Jimmy’s Hall lead actress Simone Kirby thrilled us with stories about the making of the film and their experiences of working with the celebrated director. Local film maker and film journalist Felix Norman skilfully interviewed the visitors and facilitated a Q & A from the audience.

We then cleared the floor and Mike Mussel and his folk musician friends filled the room with their splendid music. Ceilidh caller Louise Wells led an hour of energetic dancing. There was much twirling and much laughter. As the Irish say, we all thoroughly enjoyed the craic.
And we made £800 for the hall!
Marianne Craig

Our sponsors and friends (rotating selection)